skip to main | skip to sidebar

This blog hasn't been updated in ages, but if anyone still has these posts lurking in their RSS feed, make sure you check out the West Coast Uninvitational this coming weekend! 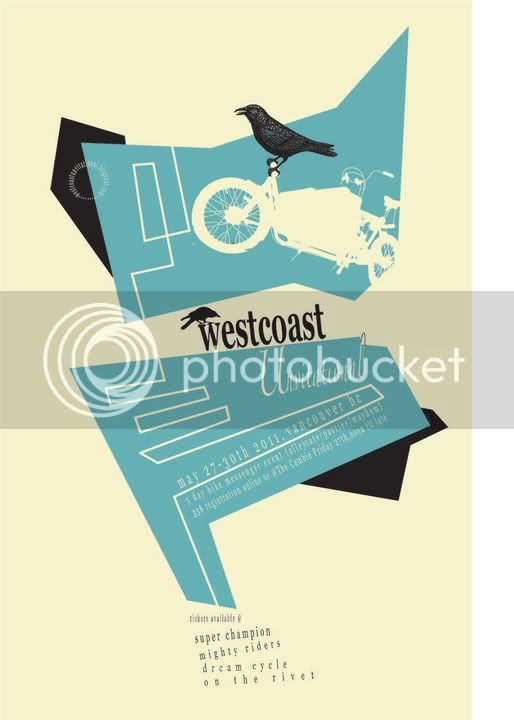 More info on facebook.
Posted by Mitchell Bowman at 3:14 PM No comments:

The Cycling Inquisition's Interview With A Legend

Lucho over at The Cycling Inquisition just posted a really neat piece. he got a chance to conduct a phone interview with one of his childhood heroes, Columbian cycling legend Ramon Hoyos. Definitely an interesting read. Check it out.
Posted by DistrictXII at 11:51 PM No comments:

Details are still kind of hazy, but the perennial Vancouver tradition of having an alleycat on or near Valentine's Day appears to be continuing. On Saturday, February 13th, racers are to convene at MacLean Park at 4pm. Racing is supposed to be underway by 5pm. The standard $5 entry fee applies.

That's all the details that have emerged so far, but stay tuned for more details as they materialize. 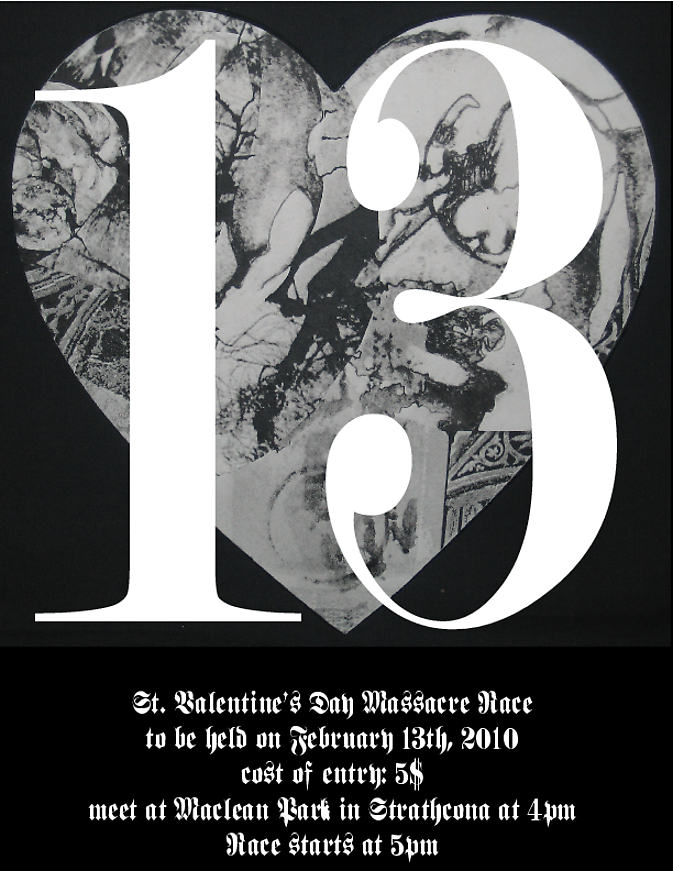 So I just did some layout changes to make everything a bit easier on the eyes. I also updated the blogroll, which you will find somewhere near the bottom of the right-hand sidebar. I removed some stuff that isn't particularly relevant to this blog in it's current context, and added some stuff that is. If you have any sort of blog or site that is in any way related to Vancouver and/or cool bike shit, please let me know. You can get at me in the comments of this post, or at districtxii at gmail dot com

Thanks,
DXII
Posted by DistrictXII at 11:18 PM No comments:

Looks like the "official" site for Monster Track 2010 is finally up. The date was announced last month at some point, but there was no mention of a site that would post updates closer to the day. Well, it's there now.

It would be cool to see a Vancouver team at MT this year. I'll almost definitely be too broke to fly out there, but someone should make it happen. If you do, please keep me updated on your escapades! 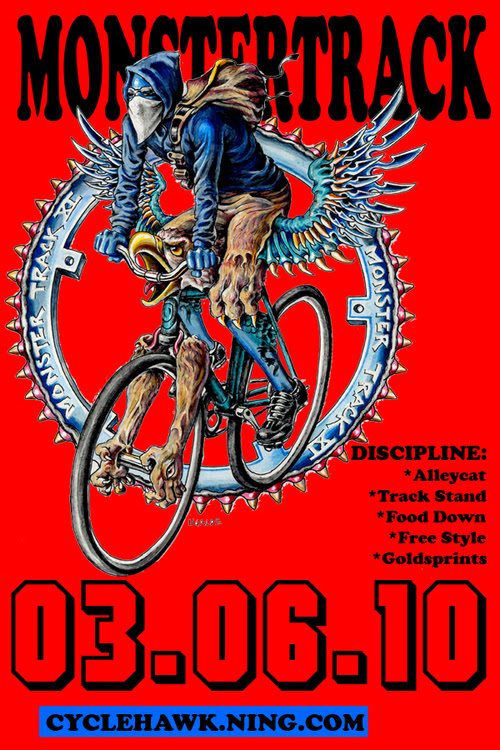 Posted by DistrictXII at 4:59 PM No comments:

This month's iteration of Gastown Sprints begins in a scant two hours! There's a bunch of loot to be won this time 'round!
Posted by DistrictXII at 5:49 PM No comments:

"London To Paris" Premiere: The Aftermath

So the "London To Paris" movie premiere, and accompanying alleycat race, was held this evening.

On the race side of things, a grueling circuit of some of the steepest hills in Vancouver was on the menu. Starting outside the premises of legendary purveyor of track-related delicacies Super Champion Shop, racers threw themselves at the hills of North Main Street. Upon reaching 33rd Ave. (or thereabouts,) the valiant contestants had to mash their way up a steep, winding ascent to the top of Queen Elizabeth park. When this peak was reached, a challenge awaited!

Once the beer had been bonged, racers returned the way they had come, blasting down the serpentine decent all the way back to Super Champion. As far as anyone knew, this was to be the end of the race...but no! When the racers arrived, they were told there was yet another destination! Grandview Park, they were told, would be their next checkpoint.

Several rolling hills later, racers enter this second park, and had to hunt for the checkpoint marshalls. Eventually, they were located...on the polo courts, of course! No challenge to be had at this checkpoint, racers simply retraced their steps back to Super Champion, and then the race was at an end...for real this time!

First place went to cyclocross enthusiast and chronic sufferer of The Ginger, Morgan Taylor. Runner-up was the behooded Benoit, and third place was clinched by Nate and his handsome yellow road-conversion. First girl across the line was Haley, the brain behind the legendary Bridge Battle.

Once everyone was safely tucked back inside Super Champion, the film premiere began. I will leave film critiquing to those more qualified to do so, but I personally enjoyed it.
Posted by DistrictXII at 9:36 PM 5 comments:

A little bit over a week ago, Stevil from All Hail The Black Market did an interview with Spencer Canon, who's the owner and director of Ritte Van Vlaanderen bicycle company and race team.

Needless to say, I have a new favourite team. Highlights from the interview include such bangers as "Hell, cycling fans are so bored that Garmin looks exciting for incorporating plaid."
Posted by DistrictXII at 1:17 PM No comments:

So, it seems there is to be some cycling-related goings-on this coming friday. First off, starting at 6pm, there's going to be a short alleycat; starting and finishing at Super Champion Shop, it promises to be an uproarious affair. Immediately after the conclusion of this race, the aforementioned Shop of Super Champions will be having an in-house screening of the much-talked-about London To Paris cycling adventure film. 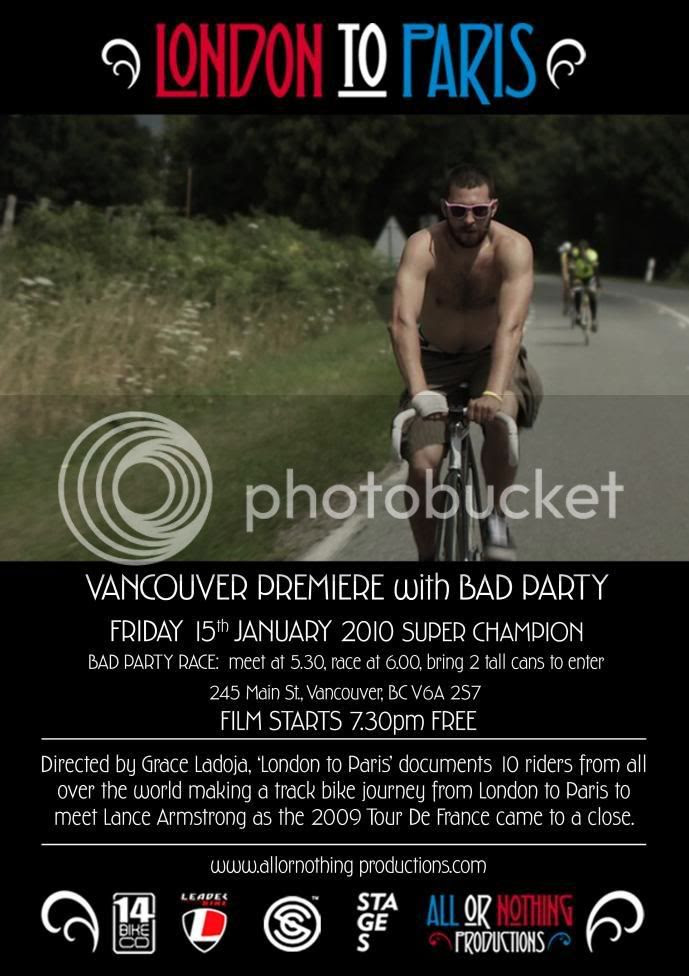 So uhhh...yeah. Y'all should come out.
Posted by DistrictXII at 8:31 PM No comments:

It's coming up on that time again...Gastown Sprints time! January 20th at the Astoria, y'all will once again get a chance to spin your little hearts out. Rumor has it that there's going to be some prizes this month, too.

Be there by 8:00 if you want to race, and bring a fiver to get in the door.
Posted by DistrictXII at 4:56 PM No comments: